Four bodies lay strewn about in the dew-dipped grass; its sharp blades tickling their exposed skin. One groan, another sigh, and they slowly regain their consciousness from the deep sleep they had last been in.

As they wake, they immediately notice the noxious smell of…soot? Charred dust? The four individuals pulled themselves up from their prone position on the ground, peering around. They immediately spot one another, but what seems to be more alarming is where they are…a place none had ever seen before.

It appeared to be a valley, vast and curling hills with nothing but long grass and an incredibly thick, grey fog disallowing them from discerning many features of the valley. Was it morning? Night? Afternoon? As they turned their heads to the sky, they notice they cannot find the sun. Nor the moon. But instead, the soft, dull light appears to be emitting from the fog itself. As if it is lighting their way.

A human male, brawny and strong, begins to open his mouth but is promptly cut-off by a voice sounding in his head.

“Welcome, friends, to the Asphodel Meadow.”

The voice sounds soft, perhaps a bit old, but it causes a soothing sensation that calms their heightened nerves.

The human male finally spoke up, his voice low and gruff as he clutched the hilt of his axe. “Who goes there?!” he demanded, his voice wrought with confusion and authority all at once.

An astonishingly beautiful male, barely clothed, spoke up in a relaxed tone, “Man, you guys, I think my guide is talking to me! Wait…who are you guys?”

A woman, dressed in a long robe, takes out globe just slightly bigger than the palm of her hand. A colourful set of cards suddenly appears around it, floating around the globe. She studies it for a moment, then purses her lips as she looks from the globe to the sky. After a moment she reluctantly puts it away.

“Are you – are you guys mercenaries?” asked the third man with a baffled expression.

“Mercenaries? Never heard of the sort,” the brawny man quickly responds, “Name’s Rorik,” he said with pride, straightening and flexing his shoulders.

“Roach,” says the other who had been inquiring about their martial status.

The blond, gorgeous man was squinting his eyes and looking at his surroundings. “Dudes, where are we?” he then opened and closed his mouth a few times before quickly adding, “Oh! I’m Chadwick, but you can call me Chad,” and he winked at his new companions.

Rorik and Roach raised their brows as they regarded Chadwick.

“My name’s Qilynn,” said the woman, “My star globe cannot find our location either. I’ve never seen such a thing before. Does anyone have any idea where we are – or who that was?”

“I am he, Virgil, who has been damned here for eternity,” the voice spoke again. “Others have been brought here before you, yet none have succeeded in their task.”

Qilynn, Rorik, Roach, and Chad all exchanged a look with one another. “What task?” Rorik eventually spoke up.

“To escape?” the voice responded, questioning itself as it did. “I am never sure of the task you are needed for, but I know that you are needed…why else would more of you keep coming here?”

The group paused, peering out across the foggy valley. “Where are we?”

“At the entrance to Limbo – a place I would not wish upon my worst enemy. I can do my best to guide you to safety so you may find your escape.”

“Can we trust this man?” Roach questioned aloud.

Chad quickly responded, “Absolutely, man! It’s my guide – he’s guiding us by talking to me!”

“If you follow the valley of the Asphodel Meadow, you shall come upon a river. This is the River Acheron. From there you shall see a path which will lead you to me.”

The wary group looked at one another. Was this man worth trusting?

As if hearing their thoughts, Qilynn spoke up, shrugging in defeat, “He’s all we have right now. Unless any of you know where we are?” and with that, she began on her way descending the valley in the direction which the fog was lifting ever-so-slightly.

They walked together for what felt like only a few moments, silence engulfing them for the most part, the stranger’s in a strange land feeling uncomfortable with perhaps the omniscient voice in their heads.

“There, a river,” Rorik pointed out.

As the party slowly approached the River Acheron, they began to take notice of its grey, murky colour, and the offensive stench of soot hanging stronger in the air.

A twig snapped from beneath the pressure of a foot in the distance; it echoed softly. Rorik, Roach, Qilynn, and Chadwick all grasped their weapons suddenly.

From across the 15-foot span of the River Acheron, bodies began emerging from the thick fog. They sauntered with a surprisingly slow, thudding walk. Their backs were hunched, their arms hung low, and one let out a low groan.

“Bodies of the men whose souls were ripped out before they could expire – damnations, they are,” Virgil spat with disgust.

“What the devil are those things?” Roach hissed, withdrawing his weapon as he did.

Before anyone could respond, one of the bodies had sauntered into the waters of the river itself. Then another. Until all four were making their way across, only just barely ankle-deep in the water.

Rorik charged in, his axe swinging ragefully at the humanoid bodies. Each hit landed with a resounding crack of bones and tearing of flesh. Roach sliced with his scimitar, Qilynn used the magic of divination as Chadwick utilised his natural magic as well to fight these foes.

It was not long before Rorik landed a blow so hard, the enemy crumpled to the river’s floor. For a moment, it appeared motionless, but then…it stirred, it propped itself up on its elbows and began to make way for standing once more.

Horrified at the sight of this mangled body coming back to life, Rorik swung once more directly in the chest of the zombie.

This time, it did not return.

Bleeding, panting, and in a confused state of pain, the three men and Qilynn laid quick waste to the four zombies and left their bodies to rot in the water of Acheron. As they crossed over to the other side, they were met with a very distinguished path. Lining it were countless barren trees, their roots twisted, their branches fragile, their twigs sharp and impeding. The skin of the trees were all a dark, ashen grey – almost black – and they sat eerily against the grey canvas of the world around them. So void of colour.

For the first time since awaking, Qilynn looks around herself for a moment. She grasped her weapons, her star globe, and cards, but went wide-eyed. “I haven’t my pack. My food, my bedroll, my…”

“I haven’t, either,” Rorik informed her, Chad and Roach quickly adding theirs were missing as well.

“Those will not be necessary here,” Virgil spoke again, “For you shall not go hungry here, though you will never be satisfied. Nor shall you grow weary here, yet you may rest from your wounds.”

“Never go hungry? This is a place of the Underworld, is what it is!” Rorik growled.

The party begrudgingly began to walk the path they were instructed to, and when they peered over their shoulders at where they came from, they noticed it swallowed up by the fog now. The only way appeared to be forward. Toward Virgil – whoever he may be. It would be decided if he could be trusted upon their arrival.

As they began their journey on the path, a stale wind began to pick up. It sent shivers through their spines and caused the hair on the backs of their necks to stand up. It was simple wind…and yet, it felt unnatural on their skin.

“There what?” Roach quipped, squinting his eyes in the fog. “It’s just the wind,” he assured.

The wind whistled, whipped and moved about their bodies suddenly, become even colder than it already was.

Then, the wisps of wind began to take form. It shaped itself into body’s of men, but their eyes were haunting, their jaws racked open in a silent scream, their skin charred and spiked in certain places, their wrists shackled with chains that hung off into a disappearing void. They appeared to be both there and not at the same time, their bodies incorporeal. 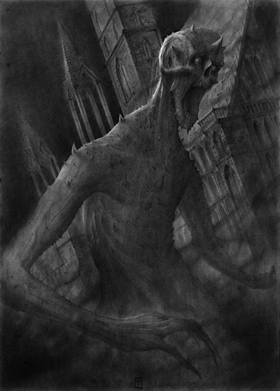 The voices were wailing at them, piercing their eyes with their harrowing pitch.

“This is who Limbo was created for,” Virgil said amongst the curdling screams, “These lost Souls. Those who choose to ignore the Holy Power which has given us life. They long for the escape of death – true release. Be careful now, friends, these Harrowed Souls can ensnare you with their sadness if you let them.”

The party looked at one another, the Souls still screaming nonsensically at them as they slowly unsheathed their weapons.

“It is better to suffer amongst numbers than to do so alone.”

A reimagining of my homebrew “Ascending Inferno” campaign inspired by Dante’s “The Inferno”.