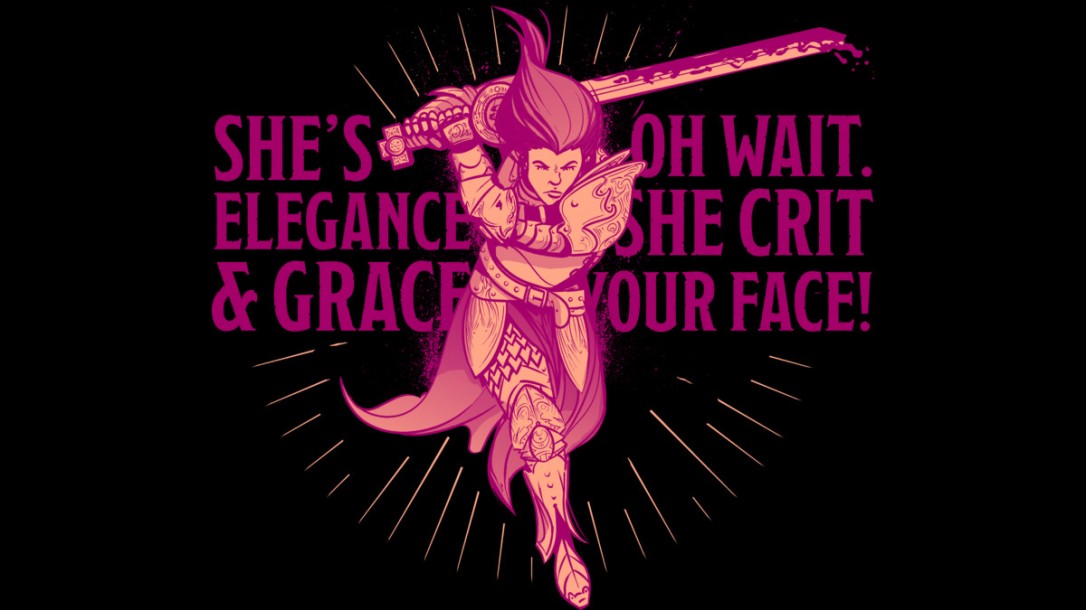 I pressed my lips to the head of my mechanical pencil, clicking it in.

This was intense. Everything had to be calculated. But I couldn’t stop to think for too long…when you’re battling a minotaur, how much time do you have to think and reflect on your next course of action?

At least while playing Dungeons & Dragons, you’re able to have a brief moment to yourself.

My turn was approaching, my eyes trained on the quickly scrawled map in front of me, looking at the placement of our coins representing our characters. I was a Halfling Rogue, Desi, who was rash and boisterous. Desi, the rusty penny.

The cleric had healed the wounded – I’ve yet to be hit, especially since I operate mainly at range. Fjord, our brutish, human barbarian, was up at the front wildly swinging an axe at a minotaur. A minotaur! We were only second level, how did we get ourselves into this mess?

My partner, a man ten years my senior, was playing an Elven Paladin. It was his turn, mine was following. I was going to take a shot with my crossbow, attempt to close the distance, and then a quick stab with my dagger. It was the best I could attempt right now. I can’t wait to start multiclassing as a Wizard.

The lead from my pencil was so long it toppled out of its tip. I brushed it off the coffee table we all sat around. Okay, my turn. I picked up my d20, opened my mouth to call my action, and then…

“Here, Mysty, why don’t I choose what Desi does? I know combat rounds can be confusing,” the DM, Bruce, said, and suddenly my character sheet was being snatched out from underneath my elbows.

“It’s, okay, thanks,” I responded cautiously. “I peak around the corner to lob an arrow at the minotaur,” I roll, “It hits with a 25…only 8 points of damage, though…and then I’m going to rush up and try to hit him with my dagger using a flanking bonus. It fails.” My turn took less than thirty seconds if I were to calculate and assume. Thirty seconds.

The DM, Bruce, a man nearing his forties playing with a teenaged girl, raises an eyebrow. He purses his lips, chucks my character sheets back at me, and continues to the next person’s turn.

Unfortunately for me, the minotaur seemed incredibly focused on myself for the rest of combat and I was knocked unconscious. At least it wasn’t true death.

When I left my 3.5 D&D sessions that evening, I was confused, to say the least. What had that been back there? Why did Bruce seem so upset?

I went to the bathroom, the game was being played in my partner’s brother’s apartment. Being as quiet as a mouse, as always, apparently, the three men I had been playing with didn’t hear me finish. As I crept down the stairs, I overheard my partner speaking up. “Man, that was pretty harsh getting the minotaur to go after Mysty like that.”

“I don’t care, she’s a girl. Girl’s suck at D&D and they shouldn’t be playing with us – there’s no fun in it. She can play how I want her to play or she’s not welcome at my sessions,” he said with incredible absolutism.

I felt like the wind was knocked out of me. Really, is that what happened? I thought it was the luck of the draw. Maybe the minotaur really didn’t like Halflings? Maybe Bruce, the DM, had rolled a d4 and it chose me to be picked on?

My partner sighed. The conversation ended there, it seemed. As I emerged to the room, it took everything for me to not yell at him. If my partner and his brother weren’t going to defend me now…why would they if I were to confront this much older gentleman about this sort of conduct? Besides, it’s technically his game. I just wanted to play D&D, however, I could manage it. In my small town of fewer than 3,000 residents, it was difficult to find anyone who indulged in such hobbies.

As time went on and I moved on to a new city and new, better relationships, the incident of that night turned out to be one of many. Each unlike the one before it. Each unique with their own circumstances and outcomes. And after each time, it became more difficult to stand up and use my voice to simply say…

It is not a secret that video gaming and tabletop gaming both, in their creation, were aimed at boys. Young, adolescent boys. Boys who did not fit in and wanted to find a place where they could be themselves and feel welcomed. Who knew something like D&D would become so wildly successful and have such a wide range of players not dependent on age, gender, race, or nationality.

So, after decades of this game being played…why did this prejudice against woman still exist with some caveats?

More importantly, as a woman who simply thoroughly enjoys gaming, what can one do to not allow these toxic beliefs to leak into their gaming experiences?

Ignore, stand up for/against, begin a cordial conversation with those segregating women in the community?

Personally, I’ve attempted and exhausted all options it feels. Thankfully, I have found my “hub”. My Local Game Shop (Dueling Grounds in Peterborough, Ontario) is full of wonderful individuals and gamers. If the owner ever heard of any prejudices happening, I feel safe knowing he would put a quick end to it.

However, out in the community, beyond the LGS, the experiences can be harrowing. And daunting. Trying. It can mentally beat someone down until they give up and leave the community.

I do not believe this is what D&D (or any Tabletop) communities stand for. They began to give a place at a table to those who never got to sit at the “cool kids table”. They are a beacon of light to the bullied, the segregated, and this should include all genders.

As a gamer, going forward, all I can do is share my experiences and stop others from experiencing them (or causing them).

You, yes you, as a gamer…if you ever witness such a prejudice at a table (be it towards a woman, a PoC or otherwise minority), realise the person it is happening to may not be standing up for themselves because they are shocked or maybe even scared. Speak up with them and keep those toxic ideologies away from our communities.

3 thoughts on “Desi – My First Experience with Tabletop Sexism”