Truth is, it takes a while to get to that expertise of DMing, and even then the DM is likely flying by the seat of their pants.

However, a novice DM can be just as good as one who has been running games for decades. I’ve attempted to compile all of my own DMing advice I’ve picked up along the way here so as to make your foray into DMing hopefully less intimidating.

(This list will be a continual work in progress as even the most experienced of DMs – not saying I’m one of them! – grow and learn new things after each and every session).

Have Fun: This first piece should go without saying. But it needs saying. Too often the DM gets wrapped up (understandably) ensuring all of the players at the table have fun. It’s incredibly important to remember that in reality you are a player yourself and if you’re not having fun, the table suffers.

You Don’t Need To Know ALL The Rules…: Seriously, you really don’t. And who ever does? If this was a necessity to being a good DM we would have a serious lack of tables to play at. The most important thing about the rules is that you know where to find them and how to look for answers when you encounter an issue during game play. (Resources like D&D Beyond, 5e Spellbook Phone App, Complete 5e Reference Phone App, and Roll20 SRD Compendium are fantastic for quick look-ups. I also highly recommended tabbing your Monster Manuals, Dungeon Master Guides, and other relevant books during prep for that session). 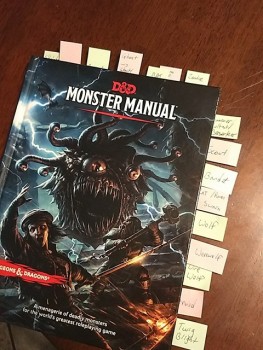 …But Know Enough To Get By: You should still definitely have a working knowledge of gameplay before you dive into DMing. Like stated above it doesn’t need to be extensive but it needs to be enough to keep the game running smoothly (how combat operates, appropriate uses for skill checks or saving throws, how PC and NPC interactions can mechanically go, etc.)

NPC/Location Cheat Sheet: This is incredibly useful. Before play, set up a list of random NPC names (with one or two attributes describing them/what they do), and have it in case you need it on the fly. As for locations, I have a bunch of random village/city names, descriptions, and a couple shop names/descriptions always ready at hand.

Filling The Silence: Sometimes during game play, out of combat, silence can envelope the table when the group is struggling to roleplay a scenerio or perhaps make a choice on a path. As a DM, I think it’s vital to gently fill some (not all) of these silences with descriptions of the NPCs that may be involved, the environment around the PCs, how the air feels around them, the general mood that is set amongst the party at the moment, etc. This will help the players get into their character more which also assists in making those decisions.

Think, Would I Enjoy This As a Player?: Everyone is there to have fun. You want to make it enjoyable.

The PCs Are the Heroes: Not the NPCs. The NPCs should help the PCs stand out and evolve.

Use the Player’s Backstories: Take time to read and truly understand your players and their backstories. Then, figure out ways you can subtly add this into the campaign.

Bad Guys Can Run Away: I know, it’s such a novel idea, but not all bad guys fight to the death. Cowardly or highly intelligent bad guys often would, in character, flee upon realising their demise was certain.

Challenge Your Players: If every combat I take at most 1/5th of my hit points and everything around me is easy to hit, I won’t be enjoying myself. The more challenging combat is, the more rewarding the success.

Be Wary of TPKs: On a similar note, try not to TPK your party unless they bring it upon themselves. Sometimes, a group of level 1 wizards will run into a cavern and straight for a dragon. This scenerio deserves a TPK and as a DM even you cannot save them from this stupidity. However, during more difficult combats, even if the PCs are losing, always allow them a way out (through settling the combat via diplomacy or fleeing the battle altogether). It’s not fun to play in a campaign where everyone dies three levels in and then has to restart.

Critical Failures: A lot of players are upset when they roll critical failures. These can be some defining moments. Add flavour to these low rolls, add comedy, or something about the environment that would cause the character to be so distracted.

Don’t Be Too Open-Ended: But I want to let my players have full control! This is a nice sentiment, but that’s about all it is. The players should have options to choose from and explore, not just one path to follow, nor should they have infinite ones. Having an infinite amount of paths/options can actually cause the players to stall a fair bit and become lost in the campaign (in a negative way).

Include Players: Sometimes more dominant players can take over the table/role play. When this happens, try to direct yourself at the other players every so often to stimulate their role in the game. But, keep in mind some players (or characters) prefer to take a backseat, which is okay, too. The important thing is to read the table and your players to ensure everyone is having fun.

Seriously, HAVE FUN: It’s the most important part of D&D. Make friends, kill dragons, and have fun! Don’t obsess over the rules, the regulations, the little bumps in the road, the slip-ups, etc. May your rolls lead you to exciting new adventures.

Say Yes To Everything: Players will ask to attempt some ridiculous stuff. Often I will allow this. However, you are allowed to say no to some things. This does not make you a bad DM and saying yes to everything can be a recipe for chaos.

Encourage PvP: Only under very specific circumstances have I witnessed PvP turn out in a positive manner. Encouraging any type of PvP behaviour can cause a hostile environment at the table.

Let Someone Rules Lawyer You: This does not include Adventurer’s League play where the rules are more important than in homebrew. While playing at home or in unofficial play, you are the DM (don’t let it get to your head), and you can bend and twist some of the rules but I recommend only doing so for their enjoyment.

Try To Be Someone You’re Not: I feel this is vital. You are your own person and in turn your own DM. You don’t have to be Matt Mercer to be good. You don’t have to do voices or maps if you’re not comfortable doing them. You are you and you bring something unique to the table that other DMs don’t. You. Spend some time figuring out what your DMing style is and work with what you’ve got.

2 thoughts on “Do’s and Dont’s of DMing”